When he was just a little preschooler, school seemed so big and scary.  Each year he has grown more and more and become increasingly independent.  Usually Ryan likes a little bit of extra support and hand holding.  Not this year.  This is the first year that he didn’t ask me to walk him to class.  In fact, I asked him (several times actually) and he was insistent that he wanted to walk by himself.  Once we made it to the school doors, he bolted so quickly I had to pull him back just to have the chance to say goodbye (another routine he usually insists on, but now doesn’t seem to need).

In kindergarten in Massachusetts, Ryan was a super stressed out kid all the time, overwhelmed by the large school and the demands of a full school day without many breaks.  When we moved to a tiny town in New Hampshire for first grade, I marveled at the difference.  In his little class of ten kids at a tiny school, Ryan was really able to thrive and come into his own.  I worried a lot about moving him from somewhere that was serving him so well.  By third grade, the differences slowed a little bit.  He was still doing well, but not as amazingly well as he had in first and second grade.  Classes had been combined and he was now in a class of 21 students and dealing with typical mean kid drama.  I wasn’t quite as worried about moving him away anymore, which is when we expanded our horizons to look more seriously at the North Country.

I was still nervous about how he would transition into a new school.  It was a big move, away from all of the kids he had known for years.  Instead,  after we moved last Spring, he came home everyday beaming.  He told me on his first day, “Mom, I already have so many more friends here! My whole class is my friend.” He still comes home every day raving about his teacher, friends, and activities that he did that day.  It used to be like pulling teeth to get any information about his day out of him.  The school in Littleton is a lot bigger than his old school (though still small by most standards with an average of 45 students per grade), but his class size of 15 is a lot more manageable for him than 21 was.  Seeing how happy he was allayed all of the fears that I had about moving up here.

This year, it has been so wonderful seeing him excited to go back to school.  He gets a locker this year and is upstairs in the “big kid wing”, both things he has really been looking forward to.  There were none of the typical back to school, first day jitters this year.  He knew what he was walking into and he radiated confidence.  I keep looking at the difference between the first day of school last year and this year.  This year I see a super happy and confident kid who seems ready to take on the world.

I am a little sad to see him growing up so quickly, but I am also so incredibly proud of the independent and confident kid he is growing into. 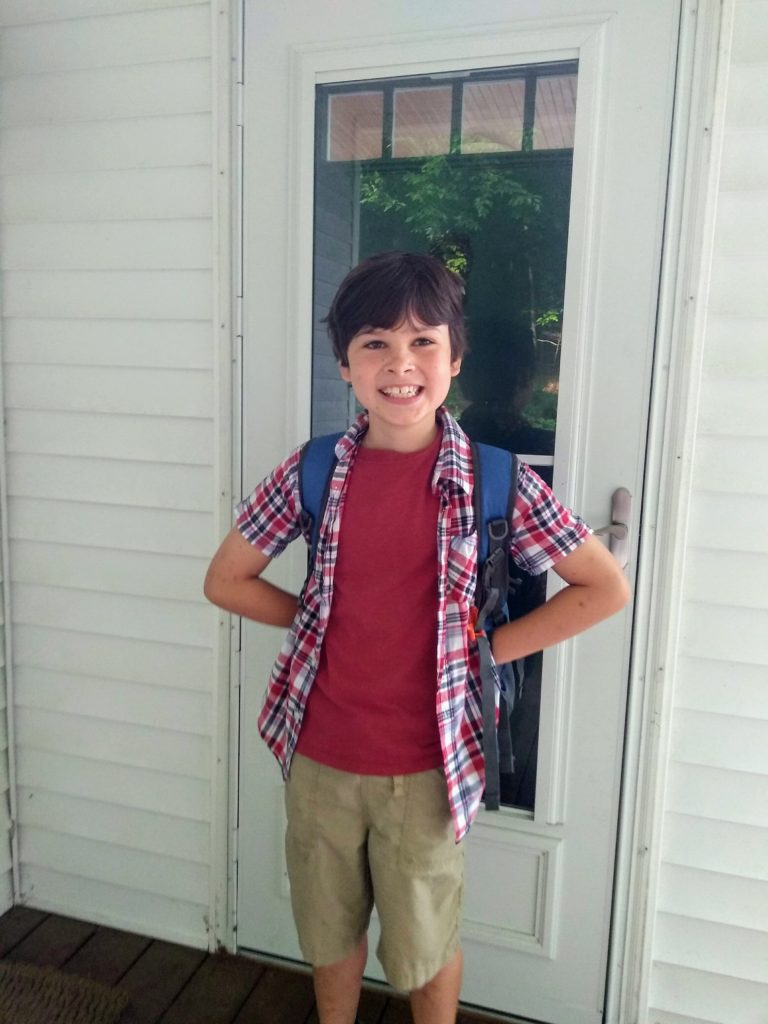 Back to School – A Journey of Beginnings